This site (groundbreakersmag.com) uses cookies in order to improve your experience and to provide content of your interest upon revisiting the site. For more information about the use of cookies on this site, please review our cookie policy in our Terms of Use. And please confirm that you agree to use of cookies by clicking Yes. Term of Use 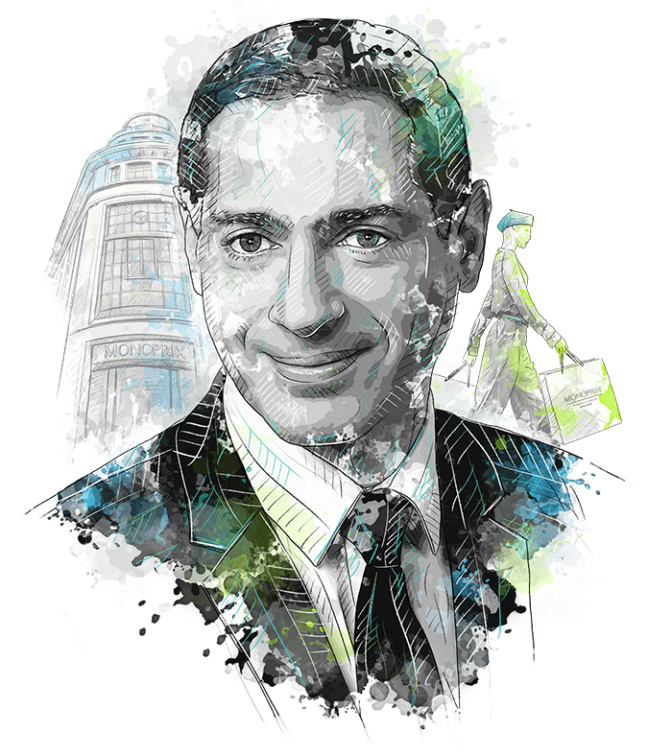 The Pivot to Premium

In 2018, La marque Monoprix decided to reinvent itself in preparation for the challenges of the upcoming decade, particularly the cutthroat competition it expects from suburban hypermarchés (superstores). The retailer’s on-going strategy is to transition from a supermarket back into a department store with a food component in the hopes of doubling revenues to 10 billion euros by 2030. And the plan seems to be working.

“By the time I arrived a year later, Monoprix had already initiated its transformation on the digital side,” admits the retailer’s President Jean Paul Mochet, citing the company’s partnership with Amazon—i.e., the development of a food e-commerce operation, including a latest generation robotic warehouse, opened in partnership with Ocado during the health crisis—as an example.

However, it was still necessary to breathe new life into the way the company was practicing physical commerce.  “This involved completely rethinking the role of our stores,” Mochet explains. “Monoprix is continuing its path of consuming well and sustainable development.”

To create more value for the in-person customer, Mochet’s team focused on the three elements, or triptych, that characterize commerce: the merchant, the merchandise and the merchant place.

Initially modeled after the successful American penny store Woolworth’s, Monoprix opened in 1932, just as the Great Depression was winding down. It was a humble neighborhood store offering basic, affordable wares at low prices.

In the nine decades since, Monoprix has slowly morphed into a trendy franchise catering to affluent female urbanites with a taste good food, fashion, beauty and interior design. “It is our ambition to enable customers to consume better, to reduce their ecological footprint,” Mochet says.

It is our ambition to enable customers to consume better, to reduce their ecological footprint.

Jean-Paul Mochet President of Monoprix and Franprix, The Casino Group
TWEET THIS

Take the retailer’s pre-made food offerings, for instance. It isn’t your typical fast food. “It is more in line with the desire of the French to eat in a healthier, more responsible way,” he says, believing that busy people will pay more for better product.

Price is less of a concern to this consumer. Neither is it for Mochet. Unlike those running superstores, he doesn’t believe in the “race to the bottom” strategy of competing solely on price. “We offer upscale products at fair prices, which take into account sustainability and the value of the products,” Mochet told Le Journal du Dimanche in June 2021.

When competitors slash prices to appeal to the masses, Mochet focused on more affluent market segments (urban centers) and increase prices, in return the consumer gets better quality, more choices, and innovation. “The things young city dwellers are willing to pay for,” says Mochet.

The move upscale can also be seen in the design of its stores. For several years now, digital technology has broadened the concept of retail space: with the smartphone, the store is in the pocket of each customer. “We also wanted to reinvent the store, for example by launching new concepts,” Mochet says, bringing together all his know-how and our art of doing business.

Monoprix recently reinvented the Montparnasse, its 5,000 square meter flagship store in the center of Paris. Now it is a trendy department store that combines the latest technology–including a new type of connected shopping cart—and focuses on traditional French craftsmanship.

Additionally Mochet has emphasized turning physical stores into memorable destinations. “We don’t just want to satisfy our customers’ needs,” Mochet says. “We want to offer them something new—an emotion—and a sensory-focused experience. Often, the difference lies in what we aren’t selling, the imperceptible or intangible element. Two initiatives I’m especially proud of are: the installation of pianos in our stores; and the broadcast of poetry in our dressing rooms. The customer is surprised into listening and experiences a magical moment. Putting the arts in our stores is a daring move, one that only a brand like Monoprix can afford to make.”